Every day, nurses have the opportunity to communicate in many different ways with their clients. Nurses can ignore their clients, use words that send positive messages, or words that send negative messages. Popular literature provides countless anecdotal accounts that words are a form of energy, and energy affects matter. The purpose of this study is to determine what effects spoken and written words have on the fermentation and decomposition processes of cooked white rice. The specific aim of this randomized controlled intervention pilot study is to reproduce the anecdotal findings of Masaru Emoto, specifically that positive words directed toward rice enhance the preservation of the rice and negative words directed toward the rice advance decomposition. This study will be a small first step toward further studies about how nurses' words affect healing in their patients.

The purpose of this study is to determine what effects spoken and written words have on the fermentation and decomposition processes of cooked white rice. The specific aim of the study is to reproduce the anecdotal findings of Masaru Emoto (2005, 2007), specifically that positive words directed toward rice enhance the preservation of the rice and negative words directed toward the rice advance decomposition.

Masaru Emoto (2005, 2007) has written many books and articles claiming that words produce energy and that energy changes matter (generally referring to water). He postulates that, since all matter is fundamentally resonating energy, by changing the vibration of the energy we change the matter (Emoto, 2005; Emoto, 2007). Therefore, the words we speak can directly affect and change our physical environment. Emoto sites an experiment done by several of his readers to test this claim (Emoto, 2005; Emoto, 2007). In this experiment, the readers filled 3 jars with cooked rice. One was labeled “Thank You”, one was labeled “You Fool”, and one was unlabeled. Every day for 30 days the readers said, “Thank You,” or “You Fool” to the corresponding jar and completely ignored the unlabeled jar. At the end of 30 days, they claimed that the “Thank You” jar was fermented, light brown and had a pleasant malt odor to it. The “You Fool” jar was black, rotted and had a putrid smell. The jar that was ignored rotted faster and was more putrid-smelling than the “You Fool” jar (Emoto, 2005; Emoto, 2007). Although this experiment supporting Emoto's claims was cited in several books (Emoto, 2005), and articles (Emoto, 2007), the evidence is purely anecdotal and there have not been any controlled studies or scholarly publications supporting his work.

Every day, nurses have the opportunity to communicate in many different ways with their clients. Nurses can ignore their clients, use words that send positive messages, or words that send negative messages. Generally, nurses and clients alike know intuitively that people who are addressed with positive words are in a superior healing environment than those who are ignored or addressed with negative words. Popular literature provides countless anecdotal accounts that words are a form of energy, and energy affects matter (McTaggert, 2202; Byrne, 2006; Losier, 2003). It is not clear how it works, but it is clear that more research needs to be done to establish how nurses' words affect the health and wellbeing of their patients.

I have done a thorough literature search on CINAHL, Medline, Psych Info and Alternative Health Watch and could not find research articles supporting the claim that words can alter substances. This study will be a first step towards filling the gap in the academic literature regarding the ability of words to affect client healing, and providing for evidence-based practice regarding how nurses' words affect their patients.

Design
This is a randomized, controlled intervention study with an experimental design. The researchers will measure the change in the characteristics of cooked rice after it is exposed to positive or negative words. Internal validity will be maintained by comprehensive training of the research assistants and extraneous variables will be controlled by careful adherence to a protocol.

This study will consist of 2 interventions (negative words and positive words) and a control. Each intervention group will consist of 20 units. In this blinded, randomized, controlled study, identical glass jars with screw-on lids will be washed and sterilized with boiling water and filled using sterile procedure with ½ cup cooked white rice, and then sealed. Then the jars will be randomly assigned into 3 equal groups labeled with the letters A-C, by a research assistant (RA). The jars will be labeled in the following manner:
A. Labeled** with the words “Thank You”
B. Labeled** with the words “You Fool”
C. Unlabeled
**(All words are printed in Times New Roman 40 point font on white paper, and taped to the outside of the jar, with the words facing in.)
Next, each jar will be covered with a paper bag to prevent the RA from monitoring progress in the jars. All the “A” bottles will be placed in a box, “B” bottles in another and “C” in another. The boxes will be labeled on the outside with a corresponding A, B or C. A different RA (RA2) will be given a set of written instructions and trained in the following treatment protocol. All RA's will be blinded and will not know what is in the bags. The RA's will simply be following a written protocol and will not know the purpose of the experiment. RA's will be debriefed after the experiment concludes.

The three boxes will be stored in a locked room in the BYU nursing department. Every day the RA2 will take each box out of the room separately into another room and will say “thank you” or “you fool” to the corresponding A and B boxes for one minute, twice a day, and then return the box to the room. The C box will be taken out of the room for one minute, twice a day, but will not be treated with words. The RA2 will be trained to focus on the box and say the words with feeling in order to transfer the energy of the words to the box of jars. This will be done every day for 30 days. At the end of 30 days, a different RA (RA3) will examine the bottles; comparing and contrasting for color, and noting other observations. RA3 will record detailed written and photographic information about each bottle. The data will then be analyzed and written in a final report.

Losier, M.J. (2003). The law of attraction: The science of attracting more of what you want and less of what you don't. Hachette Book Group: New York.

Here are some links to different rice experiments I found on the web. Check them out and see if you had similar results.

My name is Janae. I am a nursing student, and I am doing some research to replicate an experiment in Masaru Emoto’s book -The Hidden Messages in Water.

I am looking for some people to help me replicate this experiment. If you choose to participate, it will only take you about 4 minutes a day for 30 days. Please see the following posts for the details of the experiment. Each person who participates will get lots of Karma points for helping me out AND as an extra bonus, will be entered into a drawing for $100. I need as many people as possible to help me with this experiment. Please leave comments or contact me with any questions.

Cheers!
Posted by Janae at 4:24 PM No comments:

Saying “Thank you” and “You fool” to Rice Everyday

1. Place equal amounts of freshly cooked rice in two identical containers. Seal the containers.
2. Label each container. One with “Thank You” (or some combination of positive messages) and the other with “You Fool” (or some combination of negative messages.
3. Place the jars in separate paper bags or some other covering so you can not see the results until the end of the experiment (NO PEEKING)
4. Every day for 30 days “talk” to the rice in each jar with corresponding positive and negative messages (about one minute each jar twice a day). For instance you might yell “I hate you” at the negative jar or say “I love you” to the positive jar.
5. Make sure your are putting as much emotion as possible into your words and your messages. You really need to FEEL the love or the hate you are directing toward the rice. Also, make sure the jars are in similar environmental conditions but separated from each other by enough distance so the messages can be clearly directed to one OR the other.
6. After the 30 days is over, take some photos of the jars and fill out the attached form. It does not matter what the results are. All results are valid and helpful. Do not abort the experiment if you think it is not working. Please submit all results. If you forget to talk to the rice for a day, don’t panic just keep doing it for the 30 days and let me know how many days you did participate.
7. All experiments submitted before September 1, 2008 will be entered into the drawing for $100 cash prize. You may do more than one experiment. Each separate submission will be entered one time into the drawing.
8. Drawing will be held on September 8, 2008 and the winner will be notified via e-mail.
9. Send all submissions and questions to janaeolsen@gmail.com
10 Send in as many separate submissions as you like. Each submission will be entered into the drawing once.
Posted by Janae at 4:22 PM No comments:

Brief description of your experiment. Please include:

1. What were the conditions when you cooked the rice and put it into the jars? (completely sterile, mostly clean, not sanitary, etc).

2. How many days you talked to the rice, how many times per day, and how long spent each time. How closely did you adhere to the rest of the protocol?

3. A brief numerical and descriptive explanation of how much emotion you put into your messages (0 being no emotion, 10 being as much as you could possibly emote).

4. The environmental conditions of your experiment (temperature, sunlight, noise, other people, etc.)

5. Briefly describe how you initially thought the experiment would turn out and how that differed from the final results.

7. SUBMISSIONS ARE NOT VALID WITHOUT USABLE PHOTOS.

8. Enter as many times as you like. Each submission must be a different experiment with separate photos and questionnaire. The same experiment may not be entered more than once.

THANK YOU FOR PARTICIPATING. EACH SUBMISSION WILL BE ENTERED INTO THE $100 CASH PRIZE DRAWING IF RECEIVED BEFORE SEPTEMBER 1, 2008. WINNER WILL BE NOTIFIED ON SEPTEMBER 8, 2008.
Posted by Janae at 4:21 PM 1 comment: 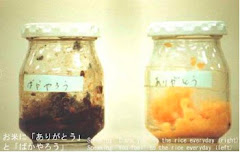